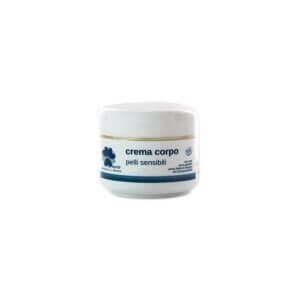 This cream represents the evolution of Benè Moisturizing Cream for Sensitive Skins code BEBU50, whose moisturizing and emollient properties are appreciated not only by allergic and intolerants people, but also by people with regular skin.

The new Benè Body Cream for Sensitive Skins is the more fluid version, more suitable to massage the body, moisturizing and soothing it without leaving oily traces.

As well as the Benè Moisturizing Cream for Sensitive Skins, it passed the Sensitive Skins Patch Test (Modified Draize Test, carried out by University of Pavia on 25 volunteers).

Thanks to Cocoa butter and Shea butter at very high concentrations, the Benè Body Cream nourishes with no oily feel. No obstructive ingredients are contained; this feature together with the right content of Vitamin E enhance hydro-lipidic film, reducing pimples and impurities.

In addition to technical features, we highlight ecological and toxicological qualities, consistent with Bensos’ Criteria:

− each ingredients is easily biodegradable (according to OECD Tests 301) and no long-term toxic;
− all ingredients are of vegetable origin, save preservatives and fragrance (the sum of them is lower than 1%);
− particularly, neither allergens nor endocrine disruptors are contained (among them BHA, a common oils preservative, and parabens) nor chemicals which are strongly suspected to disrupt endocrine system (as phtalates, linalool); we apply the Principle of Precaution.

Vitamin E is generally considered a safe chemical. An interesting review by Norwegian Food Safety Authority (Mattilsynet, 2012) demonstrates that high dosages can be harmful; the study suggests a maximum concentration, which
Benè Body Cream for Sensitive Skins complies with. This is the safest way to use vitamin E and to take advantage of it, without suffering for side effects.