The protection of the waters of lakes from pollution 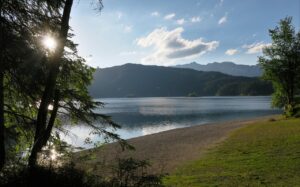 The waters of lakes are safeguarded in Italy by D.lgs. 152/2006 (“Regulations about environmental matters”), with the aim to manage the whole water cycle, starting from collection and distribution to the restitution to the environment with the best quality possible. The various steps of the Integrated Water System are managed locally, then they are subject to controls periodically by public authorities, aimed to verify the waters quality towards regulatory limits.

About urban discharges of towns under 2.000 population equivalent (P.E.), regulations are issued by Regions. For towns and cities with more than 2.000 P.E., regulations are national and European; in Italy a certain amount of highly populated territories (for example, the highly industrialized Trompia Valley, near Brescia in the Northern Italy) are yet lacking of wastewater treatment plants, leading to serious damages to the environment and human health and deserving big penalties by the European Commission.

What may urban wastewater contain? Besides flush toilets discharges, generally there are detergents and disinfectants used during cleanings and laundry.
Assessing differences between conventional and ecological detergents towards sewage systems and wastewater treatment plants, some parameters may be useful, as:
aerobic biodegradability (with oxygen), anaerobic biodegradability (without oxygen, as in the sewage pipes), toxicity towards bacteria. The two forms of biodegradation are carried out by different types of bacteria. 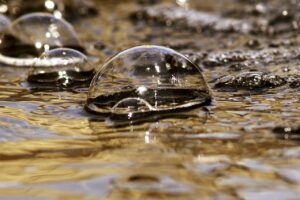 Many detergents ingredients, both for household and professional use, mostly conventional but also some ecological, are not biodegradable either aerobically or anaerobically. Some examples: sodium etidronate (HEDP), sodium edetate (EDTA), 2-Bromo-2-Nitropropane-1,3-Diol (Bronopol), carboxymethyl cellulose (CMC), sodium hypochlorite (chlorine bleach), optical brighteners, etc. These and other chemicals tend to accumulate in the environment and show long-term toxicity too.

How does a treatment plant work? Generally there are big tanks containing various types of “good” bacteria (“active sludges“), but also chemical-physical treatment stations and filters, with the aim to trasform and separate non biodegradable substances, forming with them inert sludges, that can be either used in construction, or – if polluted with too bad chemicals as toxic heavy metals – disposed of in landfills or sent to the incinerator; these methods are quiet expensive. Instead exhausted active sludges, if not polluted with too dangerous chemicals, are easier and cheaper to recycle, for example in compost.

But not all not biodegradable chemicals are holded by chemical-physical systems: for example, chloramines are little strong molecules and escape any treatment or filtering. They are made by the reaction between chlorine bleach or other chlorinated disinfectants (excluding chlorine dioxide) and protein molecules containd in soil particles and in disinfected microbes; chloramines are carcinogens.

In conclusion: when there is a wasterwater treatment plant, most chemicals are biodegraded, or at least kept and disposed of in other (more expensive) ways; in the lack of a treatment plant, the environment receives every pollutant wastwater and tries to degrade it, leaving untouched what is not biodegradable.

Criteria followed to manufacture Bensos’ products are designed to maintain the best lakes and rivers water quality, both in case of sewage pipes leading wastewater to a treatment plants, and in case of direct discharge in aquifers.