How to make safer brand-new clothes 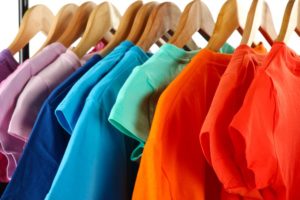 After purchasing a new dress, or receiving it as a gift, the first thing we do is try it on and verify if it suits. Well, the second thing we should do is… take this dress off and put it in in the laundry! Why all the precautions?

Fabrics dyes can be sensitizing or allergizing, particularly the disperse dyes, mainly used for synthetic fabrics. They typically do not chemically bond with fibres, so they are carried into them by chemicals called “fixatives”; however, dyes molecules applied externally tend to move away and settle onto the skin; unfortunately they are fat-soluble and tend to go through our skin, accumulating into fat tissues. In particular, dark coloured (black, blue, dark green) synthetic garments are liable to induce allergic reactions; among conditions that enhance sensitization, we can see irritated or injured skin, close-fitting clothing, sweat and excessive heat.

Another allergen, as well as a toxic chemical, is formaldehyde released by resins specifically made to fix dyes, strengthen cotton and mixed cotton-polyester fibres and prevent shrinking and wrinkling. In the past, they used resins with high amounts of formaldehyde; nowadays formaldehyde content is much lower, thanks to restrictive regulations; however, there are still many allergy cases. Scientists think that this is due to over-exposure to formaldehyde from other sources, as some detergents, cleansers and cosmetics preservatives (called “formaldehyde precursors” as they release this toxic chemical), paints, varnishes and glues used in high amounts in wood-derived materials (particle board and plywood): such over-exposure leads to sensitization; then, the little amounts released by garments are enough to elicit immune response in already sensitized people.

The above-mentioned are the main contaminants; there are many others, mainly in clothing made up in extra-Europe nations, where regulations about toxic chemicals are not as restrictive as European are. In particular, REACH regulation aim is to safeguard citizens from toxic chemicals exposure; regrettably, lots of contaminated garments can join consumers without being stopped at the border, as teachers in Allergology from the faculty of Brescia University school of Medicine said to us.

What can we do to prevent allergic reactions from textiles? Among recommendations to allergic people written in “Fisher’s Contact Dermatitis” (Rietschel RL et al., 1995), we found this: wash brand-new garments at least twice, before wearing. Generally, a healthy, not yet sensitized person may start washing clothes at least once before wearing, using allergen-free and formaldehyde-precursors-free detergents.

Fisher’s says that free formaldehyde may be released also at a later time, as fixative resins may decay and degrade in the long term; risky garments should be washed more frequently.

What detergents are reasonably safe? One important feature is the lack of allergens and formaldehyde precursors; another feature is the lack of sensitizing chemicals, as optical brighteners: sensitized or damaged skin is more liable to absorb toxic and allergenic substances. We can proudly consider Bensos’ products among safe detergents, looking to additional benefits too: their lowest possible environmental impact, their lack of long-term toxic chemicals and, last but not least, their high efficacy.