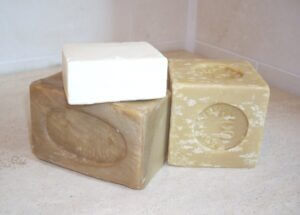 Castile soap is the most ancient and natural detergent, made with grease of animal or plant origin and alkaline substances (as lye made with woody ashes) since 3000 B.C. in Mesopotamia. Complex detergents were developed just about 100 years ago; why were they considered necessary and why are they almost totally replacing soap in laundry?

The main reason is the following: in hard waters soap combines with calcium and magnesium, giving water insoluble residues clearly dropping on fabrics. In washing by hand, the user may be careful in removing these traces by rinsing thoroughly; instead, laundry by machine cannot remove them.

Unlike a soap or a pure alkaline agent (which creates soap molecules, removing greasy soil), a laundry detergent ingredients work without giving water insoluble residues; in addition, it generally contains some ingredients working as antiredeposition agents.

Common detergents often contain other ingredients: some are efficient (bleaching powders, as sodium percarbonate); other give only the illusion of clean, whereas they only cover with a white fluorescent blanket every stains and greying fabrics (optical brighnteres and blue dyes) and conceal odours with strong and persistant fragrances.

Until 2004, detergents production affected particularly both the environment and human health: among the ingredients, there were not biodegradable and very toxic substances (octyl- and nonylphenol ethoxylated, powerful endocrine disruptors); furthermore, all surfactants were not subject to any regulations about biodegradability. Since 2005 (since Reg CE/648/2004implementation) these issues were improved: European Commission banned most toxic surfactants and obliged all detergents producers to use only readily biodegradable surfactants, according to OECD Tests 301 A-F). However all the remaining ingredients – generally the largest part of a detergent – are exempted from any environmental requirements.

Bensos, since the beginning, decided to extend the requirement of ready biodegradability (according to OECD Tests A-F) to all the ingredients of any of its products. The only exception is represented by fragrances, which are certificated allergen-free and phtalates-free by suppliers; however, Bensos uses very low amounts of fragrances and only in few products.